A brief explanation of the different variant callers used in VarSome Clinical and the quality filters applied.

What is variant calling?

Variant calling is the process by which a software program (the variant caller) identifies variants from sequence data. For germline samples sequenced using hybridization-based capture kits, we use Sentieon's DNA Scope variant caller and for somatic samples, we use the Sentieon TNhaplotyper2 algorithm. On the other hand, for amplicon kits on both germline and somatic samples VarSome Clinical uses VarDict.

Which variant callers are used in VarSome clinical?

Depending on the type of assay used to sequence the sample and on the sample itself, VarSome Clinical uses different variant callers.

What is the call status of a variant?

There are different quality metrics associated with each variant which can be used in subsequent steps of the pipeline to assign it a call status. The call status of a variant can be:

The quality filters used for germline and somatic analyses are different since we use different variant callers, which, in turn, use different parametrization. The parameters used in Sentieon have been optimized for the detection of variants from the GIAB set. In VarDict we currently use a set of minimally changed default parameters, adjusted through exchange with VarSome Clinical users.

This caller is used for germline capture kit samples and performs an improved version of  GATK Haplotype variant calling. We apply the following quality filters after the variant calling step:

Quality: the quality score is an internal score calculated by the variant caller algorithm. It can be used to estimate how confident we are that the variant caller has correctly identified a variation in a given genomic position.

Tnhaplotyper2, which is used for somatic capture kit samples, is designed to behave like GATK’s Mutect2. Tnhaplotyper2, like mutect2, has associated filtering tools which are applied to the variants found by the caller. These filters can then be used to decide whether a variant should be marked as PASS or FAIL. If a variant fails any of the filters present in the “FAIL” column of the table below, it will be marked as FAIL. Failing to pass a filter in the “PASS” column will not cause the variant to be marked as FAIL.

Somatic VCF filters that do not mark a variant as FAIL:

Somatic VCF filters that mark a variant as FAIL:

map_qual: the median mapping quality of reads supporting the alternate allele is too low.

When launching a germline/somatic analysis from FASTQ, the user will have two options:

Variants can be filtered by its call status using the dynamic filters feature. The "Call Status" filter allows the user to filter variants based on the following criteria: 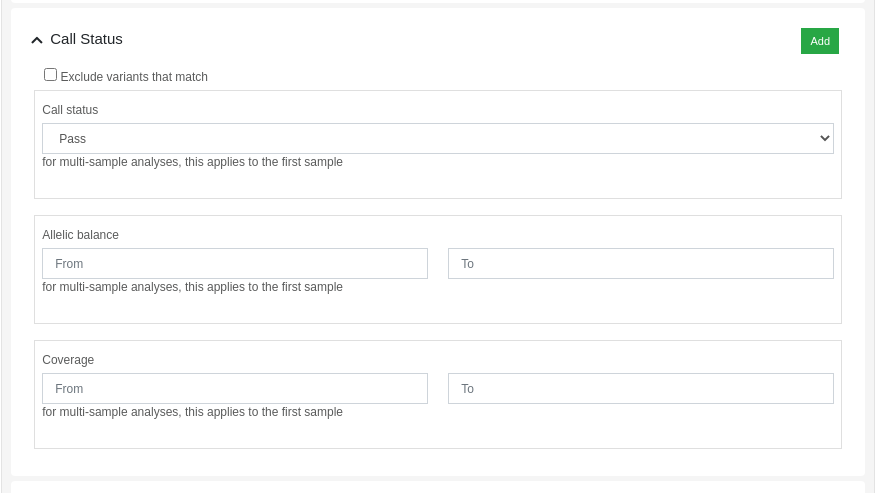