For CNV cohort analyses, VarSome Clinical provides a CNV plot, showing how the observed read depth in the area of the CNV differs from the expected. The plot can be found on its own tab, under the Variant Table.

The CNV plots are generated using a modified version of the ExomeDepth tool. 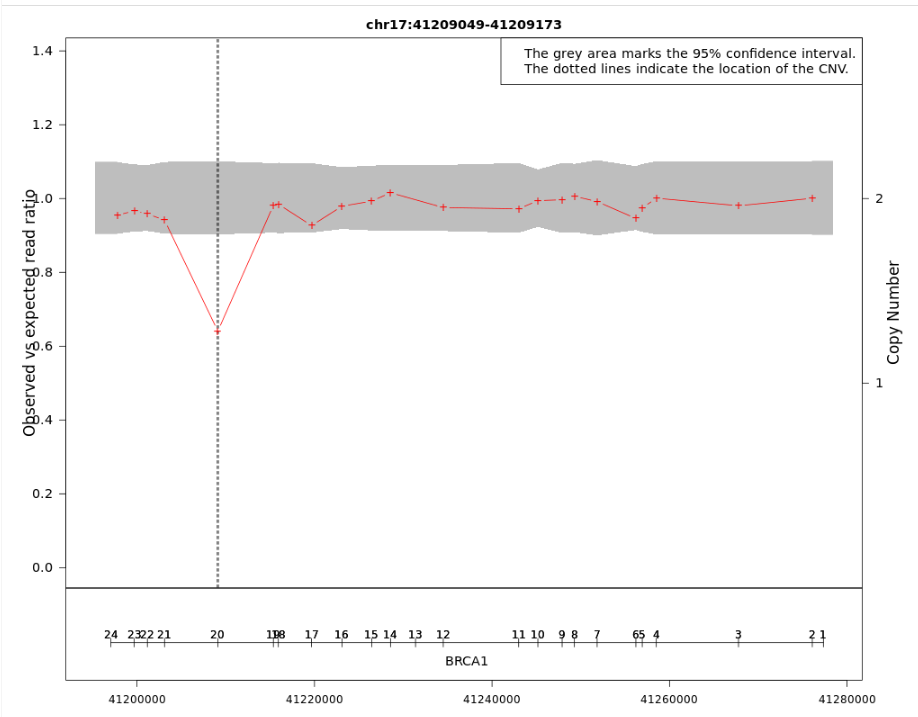 Figure: In this example, the observed to expected read depth ratio in the region of the CNV is lower than 1 and below the 95% confidence interval (grey area). These results support the hypothesis of a deletion in the exon 20 of the BRCA1 gene.

VarSome Clinical  CNV calling pipeline is based on DELLY for WGS data and ExomeDepth for WES/targeted sequencing data. The quality score is shown in both cases. The score of the call in the case of WGS CNV variant calling is the one given by DELLY while for non-WGS CNV analyses, the quality score is the Bayes Factor (BF) explained in the ExomeDepth documentation as:

It quantifies the statistical support for each CNV. It is in fact the log10 of the likelihood ratio of data for the CNV call divided by the null (normal copy number). The higher that number, the more confident once can be about the presence of a CNV. While it is difficult to give an ideal threshold, and for short exons the Bayes Factor are bound to be unconvincing, the most obvious large calls should be easily flagged by ranking them according to this quantity.

You can use the BF score to rank your results. However, there is no specific threshold we can recommend since the values will be highly dependent on the specific run.

A list of all the affected transcript positions that overlap with each CNV is displayed on the right of the Variant Table, under the "Transcripts" tab.

Once you have selected a variant in the variant table, you can click on the JBrowse/IGV icons to view the alignment of the reads in the regions of the detected CNVs.

If you click on JBrowse, you will see the alignment where the CNV called region is highlighted in yellow. The gene and the transcripts are represented above the aligned reads.

If you click on the IGV icon, you will be directed to a new page where the alignment in IGV is shown.

Browsing through the samples of a CNV analysis

You can search through the samples analyzed under the same CNV/SV analysis by visiting the results page of one and using the red arrows you can be directed to the next or previous sample: